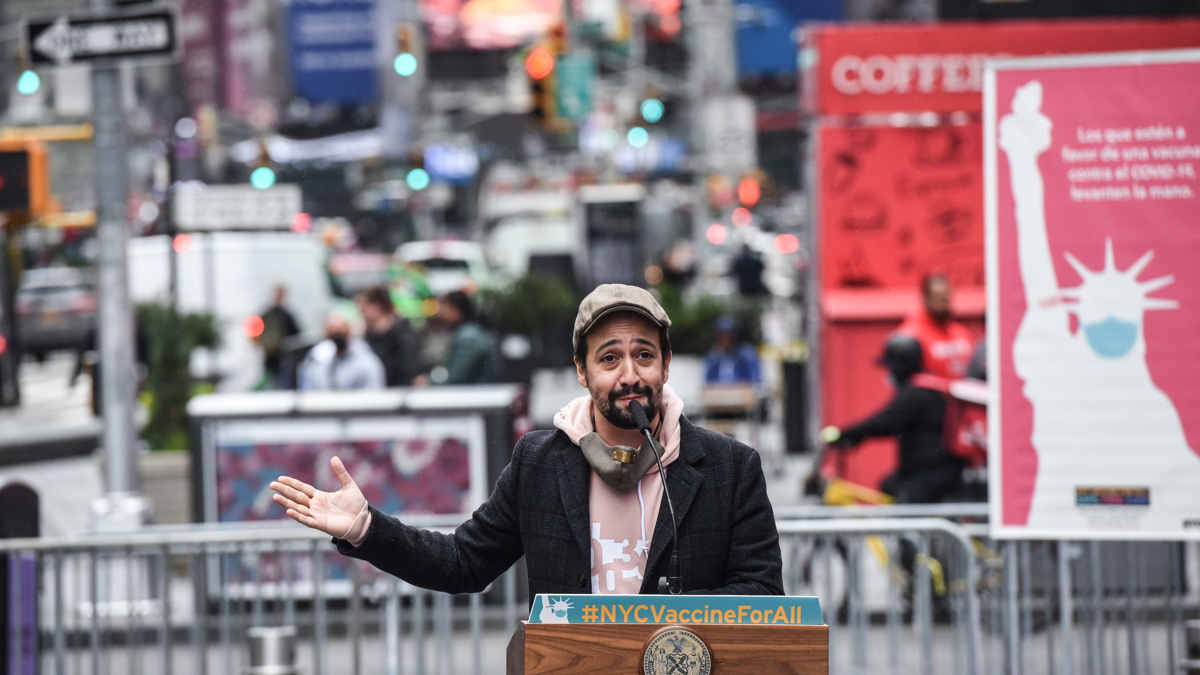 The previously promised COVID-19 vaccination site on Broadway for, and staffed by, members of the theater industry officially opened in Times Square as of April 12. New York City Mayor Bill de Blasio and Hamilton and In the Heights mastermind Lin-Manuel Miranda were among those to take the podium on the landmark day. Luis A. Miranda, Jr., Miranda’s father, shared Tweets from the event on April 12.

For the first time in months, right after his vaccine shot, @Lin_Manuel joined @NYCMayor to celebrate the Broadway community and open a vaccination center that will allow for all of us to enjoy live Theater as soon as we are ready pic.twitter.com/HLyM41EpUr
— Luis A. Miranda, Jr. (@Vegalteno) April 12, 2021

Mayor de Blasio revealed that the site will also be available to members of the TV and film industry as well. “We want to make it easy for the actors and the producers and the crews, everyone in the film and TV industry get vaccinated. So, Times Square site will also be made available to them,” he said. Deadline reports that the site, located on 7th Avenue between 47th and 48th Streets, is open daily from 7:30AM to 7:30PM ET.

“I’m emotional today. I’m thinking of those in the Broadway community we have lost over the past year. I’m thinking of Terrence McNally. I’m thinking of the great Nick Cordero, who was my age and who we lost to this terrible virus.” said Miranda, who received his vaccine on-site. “We want to gather again, and we want to tell stories in the dark. We cannot do that if we don’t feel safe and if you don’t feel safe. So the first step in that process is getting our vaccination shots, and the next steps will follow. But the first step starts today with this clinic.”

Mayor de Blasio previously addressed efforts to bring the lights back up on Broadway in a press conference on March 25. “We will move heaven and earth to bring Broadway back,” he had said. A few theatrical productions have started running in New York City, including Blindness and The Office! A Musical Parody off-Broadway. As previously announced, Shakespeare in the Park will return to the Delacorte Theater in July.